To the woods-an FIW game 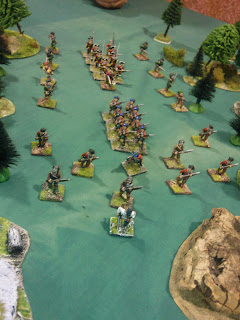 The British column advances flanked by the light companies

For the first time in a long while we played a French Indian War game using Parkfield’s Rolling Thunder rules with companies of eight figures.

The British column of two line companies and two light companies were to advance through the woods, cross the river and collect fresh supplies from a small farm occupied by militia.

The French, whose Indian allies had been tracking the column, had to stop this happening. Indians set up in ambush along the track and the two light companies advanced through the woods to attack the column in a pincer movement.

All went well until the French players drew the correct card and managed to spring their ambush whilst the Coureurs de Bois and Compagnie Franche de la Marine advanced to the edge of the track to fire on the British.


Meanwhile, due to exceedingly bad die rolling, the French regulars failed to appear and on hearing the sound of far off gunfire decided that this wasn’t for them and ran away.

Meanwhile, on the track, the first Indians charged the column, took casualties from a snatched volley and totally failed to gain an advantage, but did cause some casualties, but the column continued. The light infantry from both sides exchanged volleys and then closed to hatchet distance.

With the hatchet fight going on, the second Indian unit charged into the fray and, after causing a few casualties including one of the British officers, decided they had done enough and disappeared through the woods, as did the French lights, leaving one British company depleted enough to take no further part in the action. 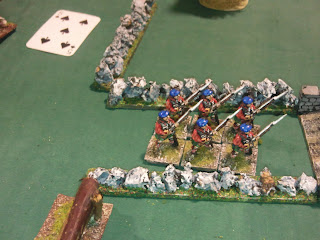 Meanwhile, the Scots withdrew, towards the farm as it was away from any enemy and met up with the militia who had, at last, decided that as the battle was almost done it was time for them to join in. 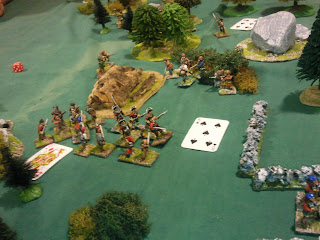 All in all a fun game with the British players thinking they had it easy until the Indians sprung their ambush. The British gained a victory only because they managed to get the remainder of their column to the farm to resupply.