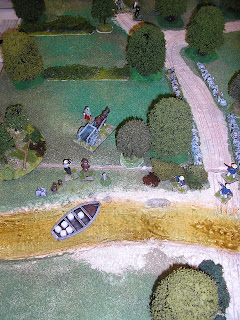 Smugglers in the mist 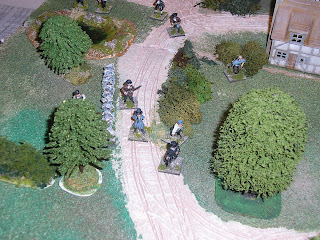 We tried the Gloire rules out last week at the club pitching a gang of smugglers led by the Scarecrow against the revenue men. Each of the four players controlled one grade three figure, one grade two and one grade one figure, with a number of ‘extras’ milling around.

The game started with a boat tied up along the river and a couple of smuggler types unloading the contraband into a waiting wagon alongside which was the fish wife who took the initiative and attacked an advancing revenue man with her boat hook. 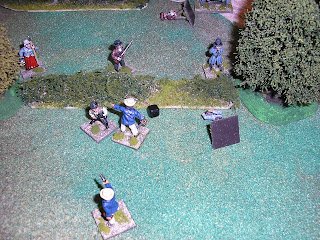 Meanwhile elsewhere the revenue men, led by an army captain home on leave, attempted to get between the wagon and the village but were attacked by the Scarecrow and his minions. The Scarecrow, although wounded, put up a valiant fight alongside his comrades and managed to fight the revenue men off and began to back away towards the village as the wagon approached. Unfortunately the two men on the wagon lost their hold and fell off leaving the horse free to approach the local minister who got it under control and led it into the village where the goods could be stored away from prying eyes.

The revenue men were at a loss now and attempted to get close to the squire but the fishwife intervened with her boat hook and wounded the revenue leader whilst the squire backed away and a sneaky smuggler managed to untie the boat and take it to safety down stream. 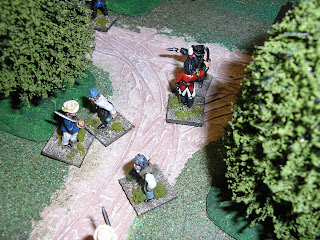 The game was a lot of fun but in hindsight I think there were too many figures on the board and if we play this game again then fewer figures will be used. The game is very dice heavy with rolls to hit and to determine the location of the wound as well as the possibility of attempting to stave off any damage. With fewer figures I think that it could have been easier to keep track of individual figures but all in all a fun game with plenty of laughs along the way.

We tried the new Warmaster Medieval rules on Tuesday evening. A 1500 point English Hundred Years War army against a similar strength French one.

The English army was primarily Bow and Knights/Billmen with a small reserve of Knights and Sergeants. The French were heavy on Knights and cavalry with crossbows and cannon in support.

The variant of the rules allowing battles to move in ‘brigade’ style regardless of the number in the unit allowed the English to move on to a hill and take up a position with stakes to their front. The French advanced very slowly towards it with an emphasis on their left where the English had left a gap.

Seeing the threat to their right the English angled back to receive what appeared to be a looming charge. A failed command roll prevented a weak line of archers from putting down stakes and the inevitable French charge caused several casualties.

The small English reserve of Sergeants however were in a position to plug the gap and realising this the French withdrew before being counter charged. With only two turns remaining the English attempted to make good the imbalance in casualties with a charge of their own which sadly did not cause any real damage to the French.

The rules worked well with the subtle changes on battles and smaller fall backs from shooting giving a period feel to the game. The English needed to be defensive but this prevented any use of initiative. Having worked hard to get in to contact at a weak point the French did enough to secure a points victory.
Posted by Simon at 08:45 No comments:

A Call To Arms 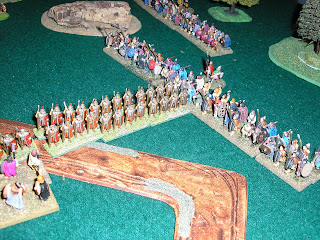 We braved the snow and Ice to put on a demo game at Call to Arms last weekend.

Using Warmaster Ancients rules a 1500 point Roman Legion had to advance through to reach a ford. Waiting in Ambush along the way were significant numbers of German warband.

The Romans advanced in two columns. Ambushes quickly appeared on either side. The Romans, anxious not to be caught in weak columns charged with the nearest available troops and quickly routed what appeared to be skirmishers.

However, having split the column the Roman commanders struggled to reform. The woods and distance between units (and some appalling dice!) making command and control almost impossible. 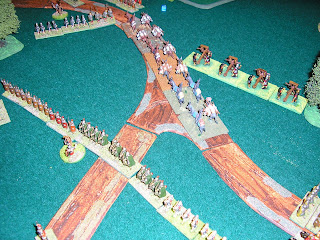 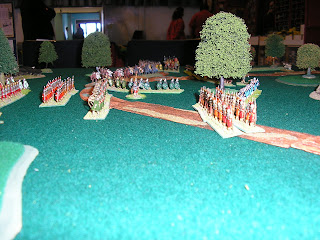 The head of the column however were oblivious to the dramas on the flank and encountered what appeared to be the main body of Germans lined up across the woodland track. An immediate charge decimated the Germans and the victorious Legion withdrew to await the remainder of the column. It was then that a horde of Germans lurking on a flank appeared and charged the retiring Legion. Taken in the flank it was the Romans turn to be destroyed.

The Roman commander was now in dire straights. The head of the column was destroyed with two strong units of Warband ready to repeat their victory. The column was split in to small groups with units below full strength following skirmishes with small units of Ambushers.

With the day coming to an end the Roman commander called every man for himself and left the baggage to the Germans.

A good game, based on Teuterberger Wald with a similar outcome.