A game was played using the modern variant of Blitzkreig Commander in 6mm, set in modern Afghanistan. 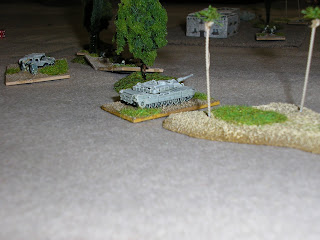 Having played Blitzkrieg commander a couple of weeks ago Chris, Alan and Pete agreed to a try out the modern version, Cold War Commander, umpired by Steve.

The scenario was a modern Middle East one with a Battalion of US marines supported by air, artillery and a tank on a search and destroy mission. Alan and Pete took a command each. Chris played the insurgent side with hidden deployment to add a bit of an edge to the US players.

The game started with Pete clearing the first of a number of built up areas whilst Alan moved forward through open ground on the left to a tree line and a BUA beyond. Pete learnt the first of a few little tricks in the rules and hit a booby trap. Whilst his platoon survived he decided to move a little more carefully in future! 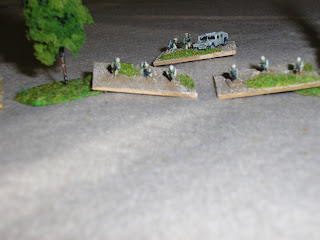 Alan meanwhile moved quickly taking a little sniper fire but getting his three stands into the tree line ready to move on to the BUA ahead. Without waiting for Pete to catch up on the left Alan advanced on the BUA and immediately prompted Chris to declare the first two of his hidden units. Catching the marines in the open with opportunity fire two stands were suppressed. Alan applied the excellent maxim of ‘if in doubt charge’! Sadly marines crossing open ground to assault superior numbers well dug in to buildings was doomed to failure and his stand was lost. 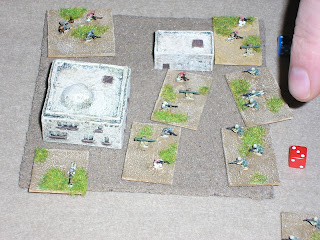 Alan pulled back to the tree line and engaged in a protracted fire fight with the well dug in insurgents. Artillery and an air strike failed to dislodge them. Pete had meanwhile cleared the first BUA and moving in to the second bumped more of Chris’ forces. The fire fight was inconclusive for a little until Pete and Alan between them managed to coordinate fire and kill some of Chris forces. Putting the heavily armoured and pretty impregnable M1 on a flank posed too much of a threat and Chris’ second trick of the evening was for his forces facing Pete to pull back out of sight and ‘hide’.

Having cleared the second BUA and with armour support the Marines were able to form a good firing line ready to assault the two final BUA. Chris now threw caution to the wind and declared all his remaining forces in them. A fire fight began but Pete and Alan pressed their advantage of air power, artillery and armour to slowly wear Chris insurgents down. With one stand off his break point and no hope of turning the tide Chris declared a win for the USMC. 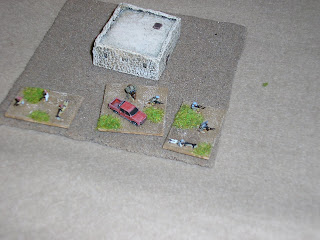 Overall a good game. CWC has simple mechanisms and plays fast with subtleties that give real complexity and uncertainty. Time to start painting up those T72 to give the marines a bit of heavy opposition!